Why We Don’t Talk 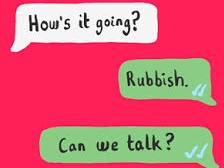 I remember a few years ago, someone, not sure whether to call her a friend, said to me that I was too pessimistic or negative I can’t even remember the exact words.

What was being perceived at the time was my state of mind. Actually that state had lingered a while and I didn’t realise.

The thing about that kind of feedback is that, it wasn’t helpful at all. It served no purpose to me at the time, in fact it made me feel worse.

Statements like that not only hurt but they shut you up entirely. Of course I became more self conscious, and what did I do instead? I bottled it all up. It didn’t change the way I felt inside, I felt worse but I just stopped telling anyone about it.

Do you know what therapist do? They just let people talk in an atmosphere where they won’t be judged. The most effective form of treatment for depression is actually talk therapy. No medication, just scheduled 1 hour of talk for a period. Most depressed people respond very well to talk therapy needing no further intervention, yes it’s that simple.

Talking is therapy, talking is unburdening. Even when the talking doesn’t give solutions to your problems, just talking about it declutters the mind and makes you feel better.

The reality is that a lot of people don’t have anyone to talk to.

In developed countries, people have to pay to get people to listen to them. That is what shrinks/therapists do. When you conclude that most people don’t want to hear about your problems, because they have theirs. It seems like a logical decision to make, to pay to talk!

However, if you can’t afford it or you are in a country like Nigeria, where do people go when they need to talk?

Why am I saying this? Sometimes, we judge people too quickly. Rather than ask if they are doing ok we put them down or say things to them that make them feel worse.

So please, next time you have a friend who supposedly is sounding like a dampner and not fun anymore, rather than harsh reprimanding words, do consider that they may be going through a hard time. Listen to their boring, negative and pessimistic talk, you may just be saving a dying soul.